The River is a track off of my self titled release due out in May 2017.

Off of my forthcoming self titled release, coming in May 2017.

I have a new album coming out soon, recorded @ The Weight Room up here in Washburn. It features new songs I’ve written over the past several years. The self titled EP features the local talent of Ryan Rousch (engineering/production), Dane Hauser (drums and backing vocals), Vanessa Van Cleve (backing vocals),Sadie Sigford (cello, backing vocals), Noble Falconer (backing vocals), and Kayla Doucette (backing vocals). It will be released digitally and I hope to also release it on Vinyl. Release date May 2017. A sneak peek audio sample below: 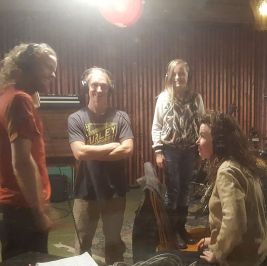 More copies of my 2012 release Inland Sea are available. I found a stack of unfinished jackets and inserts I must have forgotten! There are only ten of these available. I only crafted 100 originally. So this is the last ten of that batch. FUN! Handmade incorporating reclaimed materials, block printing, typing, and sewing.

I made an audio collage of tracks from my album entitled “Inland Sea“, released in 2012.  It’s available on my Bandcamp page for free download, or as a hard copy complete with handmade packaging (only 100 made).  Block printing, literature, and a repurposed cardboard package all made by me here in Northern Wisconsin.  “Inland Sea” was written (and partially recorded) during my 3,000 mile trip aboard my twenty foot sailboat on Lake Superior during the spring/summer/fall of 2012.

I’ll be giving a presentation about my 5 day ski tour among Lake Superior’s frozen Apostle Islands on March 20, 2014 @ 7:00pm, @ The Washburn Public Library.  The presentation will include photos and audio from the journey. Refreshments provided. Cd’s for sale. 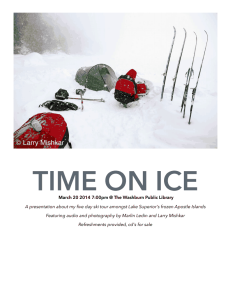 Another take on one of Beck Hansen’s tunes off of Songreader entitled Old Shanghai.

Please Leave A Light On When You Go

My take on Beck Hansen’s song Please Leave a Light On When You Go, off of his publication Songreader.

3 Months of Tucson in 6 Minutes

3 Months Of Tucson In 6 Minutes is a sound collage from my stay in Tucson, AZ. during the winter of 2010-11.  Random bits abound, slightly eerie, indeed.  Most of these recordings were done with the recorder concealed in my coat.  Visit 3 Months Of Tucson In 6 Minutes under the Field Recordings tab to find out more information.  The band heard near the end is The Missing Parts.